How to Improve the United States’ Image in the Muslim World 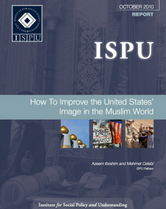 How to Improve the United States’ Image in the Muslim World

The premise of this report is that engaging with Muslim publics is increasingly important, for advancing technology is empowering individuals and groups to threaten the American homeland’s security – sometimes from the comfort of their own homes.

The rise of terrorism and cybersecurity threats – threats not from foreign governments, but from foreign populations foreign-based groups or individuals means that there is now a security incentive to engage with those populations in order to reduce their motivation(s) to attack the United States.

Improving the United States’ image with Muslim publics serves to narrow the pool of radicalized young people from whom terrorist groups need to recruit if they are to survive. “Public Diplomacy,” defined as engaging with Muslim publics as distinct from Muslim leaders, is an essential way to do this.

Before engaging international Muslim publics, however, it is advisable to listen and analyze their opinions and values so that any engagement will be successful. This should be done based on evidence, not conjecture. The evidence, in fact, shows that most Muslims around the world do share US values (even when they cannot enjoy such benefits themselves), particularly democracy. They are, however, alienated by its actions, with many seeing the United States as a military threat. American policymakers must understand this to strike the right tone when trying to address them.

This report interprets the lessons from the history of international public diplomacy and then applies them to the challenge of engaging Muslim publics. Thirteen wide-ranging suggestions are made for improving the United States’ image in the Muslim world. Among the recommendations are that the United States specifically focus on trying to encourage the freedom of speech, plurality of opinion, and defense of digital freedoms in those regions, because one of its largest strategic opportunities is the fact that both Muslims and Americans share the value of freedom of speech. by actively pursuing policies that promote this value, along with those of free debate and the plurality of opinion, the United States not only improves its own image, but also helps Muslim-majority countries follow their own path toward democratization.

It is also important to remember that the United States is not alone in trying to influence these countries’ political direction. Multipolarity is now an accepted reality (at least outside the United States), and other potential competitors (such as China) are investing in soft forms of outreach to the Muslim world. The United States’ ability to promote an attractive political alternative to non-democratic Muslim-majority countries cannot be taken for granted.

Ultimately, American foreign policy should aim toward a world in which improved understanding between the Muslim and non-Muslim worlds leads to good relations, improved trade, cultural relations, and travel. The Muslim world has a rich culture that can be explored, and both it and the US could be enriched by greater dialogue and understanding. But the longest journey begins with the first step, and the first step in this case is to prevent the Muslim world from becoming a threat to US security.