Meeting the Needs of Muslim Youth: Getting Race Right 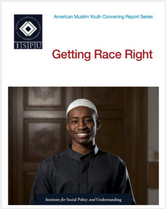 Meeting the Needs of Muslim Youth: Getting Race Right

This report is part of ISPU’s American Muslim youth series. Any American born between 1990 and 2000 probably doesn't recall a time when people kept their shoes on at airport security, could go all the way to the gate to see their friends off, or thought 'Patriot Act' was just a good deed. Today's 15 to 25 year olds don't know an America before the horrific events of September 2001. For American Muslims, membership in this generation presents additional challenges, in addition to those faced by other young Americans: from drug and alcohol abuse to racism and a crisis of religious literacy. ISPU's American Muslim youth series series addresses some of these challenges and offers actionable recommendations for parents, community leaders, and national organizations.