Facts and Fictions about Islam in Prisons: Assessing Prisoner Radicalization in Post 9/11 America 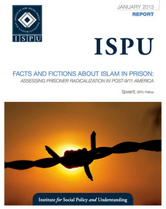 Facts and Fictions about Islam in Prisons: Assessing Prisoner Radicalization in Post 9/11 America

This report assesses the radicalization of Muslim prisoners in post-9/11 America. In the last decade, Muslim prisoners have been scrutinized for ties to terrorist and other extremist organizations, not to mention characterized as both a 'threat' and a 'danger' to national security, due to the influence of foreign jihadist movements. However, closer scrutiny shows that these fears have failed to materialize—indeed, despite the existence of an estimated 350,000 Muslim prisoners, there is little evidence of widespread radicalization or successful foreign recruitment, and only one documented case of prison-based terrorist activity. Nonetheless, some prison systems have implemented an aggressive posture toward these inmates and have made suppressive tactics their bedrock policy. This approach unfortunately overlooks Islam's long history of positive influence on prisoners, including supporting inmate rehabilitation for decades. Moreover, Muslim inmates have a long history of using the court system to establish and expand their rights to worship and improve their conditions of confinement. Hence, a closer look at 'life on the ground' turns the prevailing discourse on its head by demonstrating that Islam generally brings peace to inmates and that the greatest 'threat' posed by Muslim inmates is not violence, but lawsuits.