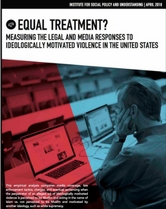 This is an executive summary of the report Equal Treatment?: Measuring the Legal and Media Responses to Ideologically Motivated Violence in the United States.

This report examines cases in which perpetrators of similar crimes receive dramatically different legal and media responses. This empirical analysis compares media coverage, law enforcement tactics, charges, and eventual sentencing when the perpetrator of an act of ideologically motivated violence is perceived to be Muslim and acting in the name of Islam vs. not perceived to be Muslim and motivated by another ideology, such as white supremacy. In this apples-to-apples study, ISPU's research reveals perceived Muslim perpetrators of violence are subject to more severe legal charges, up to three times the prison sentence, and more than seven times the media coverage compared to non-Muslim perpetrators. Perpetrators perceived as Muslim are also much more likely to be targeted for undercover law enforcement operations providing them with weapons or fake explosives.