Evolving Boundaries of Freedom of Speech and Press 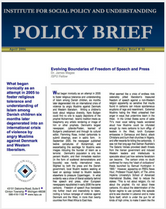 Evolving Boundaries of Freedom of Speech and Press

What began ironically as an attempt in 2005 to foster religious tolerance and understanding of Islam among Danish children, six months later degenerated into an international crisis of violence by angry Muslims against Denmark and Western liberalism. Writing a children’s book about religious diversity, Kare Buitgen could find no one to supply depictions of the prophet Muhammad. Islamic tradition treats as blasphemy any artistic rendering or image of him or other prophets. Denmark’s largest newspaper, Jyllands-Posten, learned of Buitgen’s predicament and through its cultural editor, Flemming Rose, invited cartoonists to submit drawings, even in satiric form. In September 2005, the newspaper published twelve caricatures of Muhammad, and exacerbating this sacrilege for Muslims were images ridiculing the founder of Islam as a terrorist. Denmark’s population is only two percent Muslim, and their immediate reaction (in the form of scattered demonstrations and boycotts) was hardly international news. Slighted by both the press and the Danish government, local Muslim leaders seeking at least an apology looked to Muslim leaders elsewhere to pressure Copenhagen. In what evidently was a show of liberal solidarity behind free speech and press, other European newspapers republished in early 2006 the same cartoons. Freedom of speech thus translated into further insult and insensitivity to Islam, inciting a furious rampage of violence against Denmark and the West, in more than twenty countries from West Africa to East Asia.

What seemed like a crisis of endless riots ostensibly pitted liberalism’s treasured freedom of speech against a non-Western religion apparently so sensitive that insults found in cartoons can induce spontaneous eruptions of rage and resentment. Extremist Muslims hating the West unleashed their anger in ways that undermine Islam in the West. In the United States some of cable TV’s most vocal talking heads wondered aloud how Muslims could be infuriated enough by mere cartoons to burn effigy of leaders in the West, torch European embassies in Damascus and Beirut, attack Christians and burn their churches in Nigeria, and offer rewards for killing the cartoonists. It was not that long ago that Salman Rushdie’s The Satanic Verses provoked death threats from the Iranian government and induced Western leaders and intellectuals to speculate about just how extreme fanaticism can become. The cartoon crisis no doubt confirmed for many the “clash of civilizations” thesis launched by Samuel Huntington in 1993. However, appearing on PBS’s News Hour, Professor Fouad Ajami, of The Johns Hopkins University’s School of Advanced International Studies, tried to reduce the stakes: “This is not about religion; it’s not about the prophet. It’s not about these cartoons. It’s about the determination of the Syrian regime to use cynically this episode and to sew disorder in Lebanon and to make Syria itself, which is under the gun for all kinds of high crime, to make it seem like the embattled heart of the Arab and the Islamic world.” The early violence did, indeed, take place in Beirut and Damascus, but when it ricocheted into Nigeria and Indonesia, it was difficult to defend a claim that the crisis was attributable simply to a band of local instigators backed by President Bashar al-Assad.