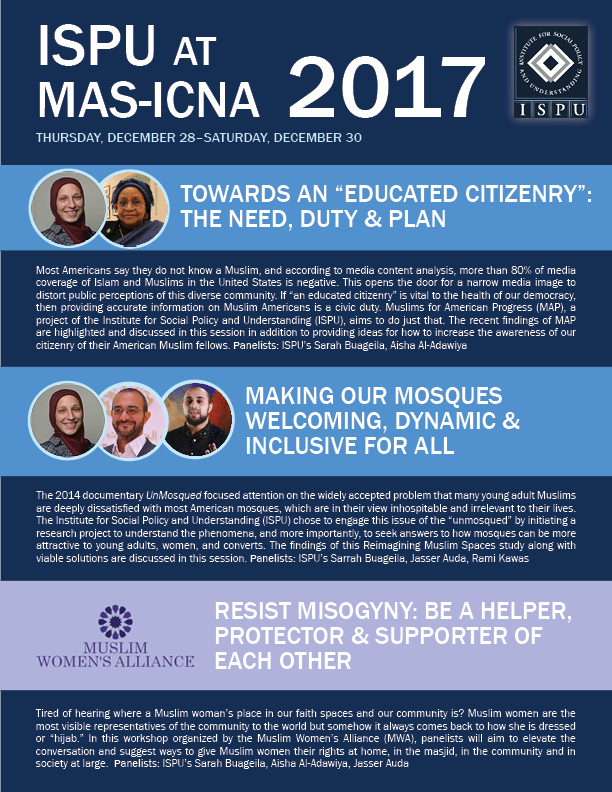 ISPU is excited to be attending MAS-ICNA this year! We hope to see you there at the following sessions:

Towards an “Educated Citizenry”: The Need, Duty & Plan
Most Americans say they do not know a Muslim, and according to media content analysis, more than 80% of media coverage of Islam and Muslims in the United States is negative. This opens the door for a narrow media image to distort public perceptions of this diverse community. If “an educated citizenry” is vital to the health of our democracy, then providing accurate information on Muslim Americans is a civic duty. Muslims for American Progress (MAP), a project of the Institute for Social Policy and Understanding (ISPU), aims to do just that. The recent findings of MAP are highlighted and discussed in this session in addition to providing ideas for how to increase the awareness of our citizenry of their American Muslim fellows. Panelists: ISPU’s Sarah Buageila, Aisha Al-Adawiya

Making Our Mosques Welcoming, Dynamic & Inclusive for All
The 2014 documentary UnMosqued focused attention on the widely accepted problem that many young adult Muslims are deeply dissatisfied with most American mosques, which are in their view inhospitable and irrelevant to their lives. The Institute for Social Policy and Understanding (ISPU) chose to engage this issue of the “unmosqued” by initiating a research project to understand the phenomena, and more importantly, to seek answers to how mosques can be more attractive to young adults, women, and converts. The findings of this Reimagining Muslim Spaces study along with viable solutions are discussed in this session. Panelists: ISPU’s Sarrah Buageila, Jasser Auda, Rami Kawas

Resist Misogyny: Be a Helper, Protector & Supporter of Each Other
Tired of hearing where a Muslim woman’s place in our faith spaces and our community is? Muslim women are the most visible representatives of the community to the world but somehow it always comes back to how she is dressed or “hijab.” In this workshop organized by the Muslim Women’s Alliance (MWA), panelists will aim to elevate the conversation and suggest ways to give Muslim women their rights at home, in the masjid, in the community and in society at large. Panelists: ISPU’s Sarah Buageila, Aisha Al-Adawiya, Jasser Auda