Implications of Designating the Muslim Brotherhood as a Foreign Terrorist Organization

Implications of Designating the Muslim Brotherhood as a Foreign Terrorist Organization 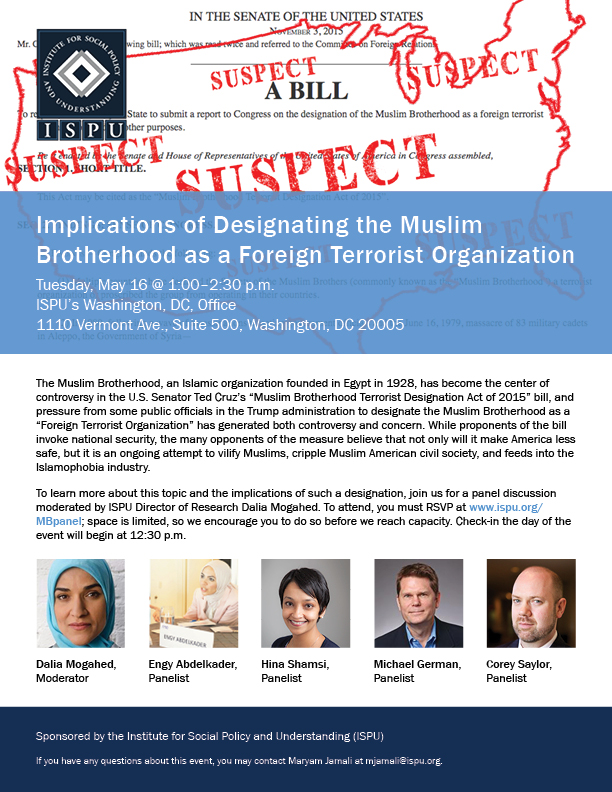 The Muslim Brotherhood, an Islamic organization founded in Egypt in 1928, has become the center of controversy in the U.S. Senator Ted Cruz’s “Muslim Brotherhood Terrorist Designation Act of 2015” bill, and pressure from some public officials in the Trump administration to designate the Muslim Brotherhood as a “Foreign Terrorist Organization” has generated both controversy and concern. While proponents of the bill invoke national security, the many opponents of the measure believe that not only will it make America less safe, but it is an ongoing attempt to vilify Muslims, cripple Muslim American civil society, and feeds into the Islamophobia industry.

To learn more about this topic and the implications of such a designation, join us for a panel discussion moderated by ISPU Director of Research Dalia Mogahed. To attend, you must RSVP. Space is limited, so we encourage you to do so before we reach capacity. Check-in the day of the event will begin at 12:30 p.m. The event will also be live-streamed on our Facebook page.

If you have any questions about this event, you may contact Maryam Jamali at mjamali@ispu.org.