An Evidence-Based Portrait of American Muslims

An Evidence-Based Portrait of American Muslims 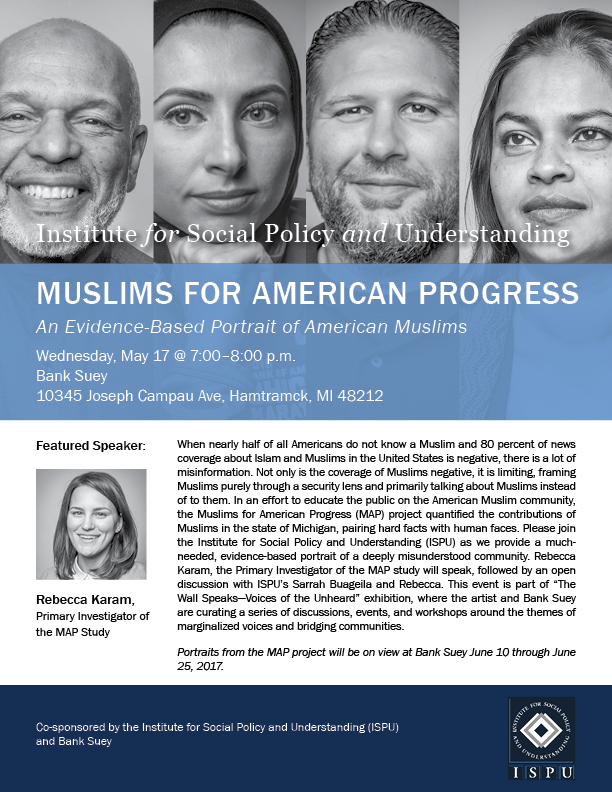 When nearly half of all Americans do not know a Muslim and 80 percent of news coverage about Islam and Muslims in the United States is negative, there is a lot of misinformation. Not only is the coverage of Muslims negative, it is limiting, framing Muslims purely through a security lens and primarily talking about Muslims instead of to them. In an effort to educate the public on the American Muslim community, the Muslims for American Progress (MAP) project quantified the contributions of Muslims in the state of Michigan, pairing hard facts with human faces. Please join the Institute for Social Policy and Understanding (ISPU) as we provide a much-needed, evidence-based portrait of a deeply misunderstood community. Rebecca Karam, the Primary Investigator of the MAP study will speak, followed by an open discussion with ISPU’s Sarrah Buageila and Rebecca. This event is part of “The Wall Speaks­­—Voices of the Unheard” exhibition, where the artist and Bank Suey are curating a series of discussions, events, and workshops around the themes of marginalized voices and bridging communities.

Portraits from the MAP project will be on view at Bank Suey June 10 through June 25, 2017.