Diversity as Strength: Getting Race Right for American Muslim Youth 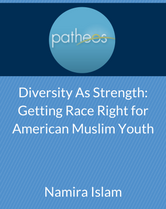 Diversity as Strength: Getting Race Right for American Muslim Youth

American Muslims are the most diverse religious group in the country, with nearly a third of U.S. Muslims identifying as Black and/or African-African. American heroes and role models include Black Muslim men like Kareem Abdul-Jabbar, Malcolm X (RA), and Muhammad Ali (may God have mercy on him).

However, the American Muslim community, diverse as it may be, is internally segregated in many ways. Often, this segregation is indicative of larger systemic issues of racism and discrimination perpetuated by non-Black Muslims in Muslim spaces.

This is a racism that, for example, would strip legends like Muhammad Ali of his blackness into a “person of color” to celebrate him while treating Black Muslim youth and adults like him with hostility and suspicion in worship spaces, condescension and erasure in Muslim organizations and media and dismissal and arrogance on the issue of interracial marriage, due solely to race.

In its newly released report on addressing the needs of Generation 9/11, Getting Race Right, ISPU contextualizes and centers the race discussion and provides expert recommendations and starting points for work to be done. Muslims reflect the society they live in, and American Muslims are no exception.

Our youth, like youth from other faith groups, are increasingly becoming unaffiliated with the mosque. Additionally, our community often focuses more on diversity and colorblindness mantras instead of a faith-based, anti-racism approach. The report notes that colorblindness “in the American Muslim community … sounds something like, ‘I don’t see color, we are all Muslims, Alhamdulillah.’”

Yet, Allah (SWT) tells us in the Quran, verse 30:22, that the diversity of our languages and colors are signs of Him for those of knowledge. The Prophet (s) specified in his last sermon that no person is superior to another based on race and implemented specific measures – from appointing companions from underrepresented or marginalized backgrounds to positions of leadership to calling out racial slurs to arranging for marriages across racial and class lines – during his lifetime to push back against the asabiyya (arrogance and tribalism) that resides within each of us.

When we do not strive to emulate this model, our communities suffer. ISPU notes that “racism is a toxic stressor for youth.” Given the potential long-term health impacts, the report provides next steps to strengthen our communities and ensure that those who lead in non-Black Muslim spaces begin to strategically tackle the issue of racism and discrimination within head-on.

In the report, ISPU outlines five key recommendations. Community leaders should seek to:

Leaders must work within their local spaces to “replace structural racism with structural inclusion,” “build bridges through experiential learning,” and “invest in anti-racism education.” Communities should conduct needs assessments in order to “provide relevant programming and services for African American Muslim youth who attend South Asian and Arab American mosques” and any related stakeholders.

Imams, board members, Sunday school teachers, youth directors, scholars and parents have the power to make a significant difference in the lives of an entire generation by implementing these recommendations in their communities.

As one expert quoted in the report emphasized, “youth do not have the maturity or social and emotional capacities to rationalize micro-aggressions and [racist] behaviors they don’t understand.” As adults, we must learn to “sit with the discomfort” that can arise from these conversations in order to do better by our children.

Muhammad Ali’s memorial service powerfully highlighted living verse 49:13, in which Allah (SWT) tell us that we were created into “nations and tribes so that you may know one another.” His lifetime was a testament to the power of knowing one another given the unapologetic identity of each.

If we respect and center our lived experiences, together we can stand strong. In a time when the youngest members of our community face increasingly hostile environments all around them, it is more vital than ever to invest responsibly and strategically in ourselves.

In doing so, we can invest in our futures as American Muslims, and fulfill our Prophetic mandate in a way that truly celebrates diversity, unity, and standing for justice for all.

Namira Islam is a Bangladeshi-American lawyer and graphic designer. She is the Co-Founder and Executive Director of the Muslim Anti-Racism Collaborative (MuslimARC), an Islamically-grounded human rights education organization which focuses on racial justice. She resides in Metro Detroit and tweets @namirari.

This article originally appeared on Patheos.