Dissecting an Evolving Conflict: The Syrian Uprising and the Future of the Country 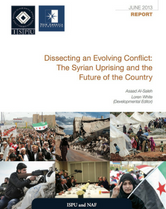 Dissecting an Evolving Conflict: The Syrian Uprising and the Future of the Country

In March 2011, the Arab Spring ushered in a new era of open opposition to the Syrian regime. Starting as a small, inchoate protest movement calling for political reforms, it eventually evolved in the face of a violent crackdown into a full-blown countrywide revolution calling for the overthrow of President Bashar al-Assad and his regime. After two years of fighting the death toll is estimated to exceed 90,000 people, with approximately 3 million Syrians internally displaced, and over 1.5 million Syrian refugees believed to have fled the country to escape the fighting. Nor has this fighting been contained within Syria’s borders. This conflict now threatens to destabilize the region, as each of Syria’s neighboring countries has experienced some degree of spillover fighting.

The extreme fluidity of events and the difficulty in discerning propaganda from factual events on the ground have rendered the conflict extremely challenging for outside observers to follow. Given the conflict’s inherent opaqueness, this report will attempt to better elucidate the crisis by offering a brief description of how events have unfolded over the course of the struggle, highlighting specific transformative episodes, important domestic groups, and the international attempts to put an end to the fighting, in order to give a more comprehensive and informed understanding of this multi-faceted Syrian uprising.

This report was published in partnership with the New America Foundation.