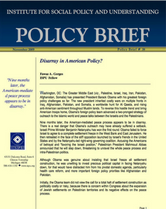 Nine months later, the American-mediated peace process appears to be in disarray. There is a real danger that Obama’s outreach may have already suffered a setback. Israeli Prime Minister Benjamin Netanyahu has won the first round: Obama failed to force Israel to agree to a complete settlement freeze in the West Bank and East Jerusalem. He then retreated in the face of the stiff opposition launched by Israel’s friends in the United States and by the Netanyahu-led right-wing governing coalition. Accusing the Americans of betrayal and “favoring the Israeli position,” Palestinian President Mahmoud Abbas announced that he will step down, threatening to unravel the whole peace process and intra-Palestinian politics.