Democracy in the Middle East: Disentangling Myth from Reality 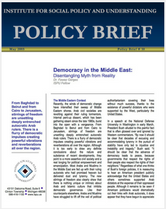 Democracy in the Middle East: Disentangling Myth from Reality

Recently, the winds of democratic change have intensified their sweep of Middle Eastern shores. Arab civil societies are revolting against their ruling tormentors. Internal pent-up dissent, which has been gathering steam since the late 1980s, burst into the open with a vengeance. From Baghdad to Beirut and from Cairo to Jerusalem, stirrings of freedom are unsettling deeply entrenched autocratic Arab rulers. There is a flurry of democratic impulses creating powerful vibrations and reverberations all over the region. Although it is too early to draw any definite conclusions about the nature and substance of recent developments, they point to a more assertive civil society and a real longing for political empowerment and emancipation. Most Arabs and Muslims in the Middle East are fed up with their ruling autocrats who had promised heaven but delivered dust and tyranny. The new stirrings of freedom also clearly show that there is nothing unique or intrinsic about Arab and Islamic culture that inhibits democratic governance. Like their counterparts elsewhere, Arabs and Muslims have struggled to lift off the veil of political authoritarianism covering their lives without much success, thanks to the existence of powerful dictators who were supported by the West, particularly the United States.