Death by Culture? How Not to Talk about Islam and Domestic Violence 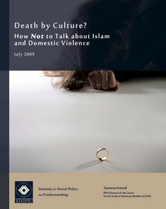 Death by Culture? How Not to Talk about Islam and Domestic Violence

The Valentine’s Day flurry of promotional ads for jewelry and chocolates and the “human interest” spots on the local news often share the spotlight with news coverage of a brutal, if ironic, Valentine’s Day “crime of passion.” Research has shown that each year murders spike in the period just before and after Valentines Day (from February 8-17), as does intimate partner violence directed at women. In part, this is why American feminist Eve Ensler launched a global V-Day campaign to “take back” Valentine’s Day as an opportunity to raise awareness and prevent violence against women and girls. Stories of Valentine’s Day “crimes of passion” grip us in part because the gruesome details that characterize them stand in such sharp contrast to the ubiquitous symbols of romantic love that mark the holiday: pink and red hearts, winged cupids, and long-stemmed roses. Statistics show that American women are far more likely to be murdered by a husband or a boyfriend than a stranger, and each year Valentine’s Day media accounts of “love gone wrong” manage to shock us without really surprising us.

In February 2009, the faces of two women of color were juxtaposed against the romantic symbols of the season as victims of domestic violence. The first is the photograph taken by the Los Angeles Police Department as legal evidence of Barbadian pop star Rihanna’s bruised and swollen face after allegedly being beaten by her African-American boyfriend R&B artist Chris Brown. On February 8, Brown was arrested on charges of making criminal threats. The police photo, leaked to popular entertainment site TMZ, sparked a media frenzy. Some of the mainstream media’s coverage was balanced and productive, furthering the national conversation on intimate partner violence and raising awareness of both its prevalence and the resources available for victims. Some of it, however, was deeply troubling in how it reproduced racial and gender stereotypes, such as whether Rihanna had triggered the attack, whether she should be blamed for not ending the relationship sooner, or whether blacks are more “prone” to domestic violence.

The second image that circulated in February 2009 had a shorter life in the mainstream media but an arguably more enduring impact, specifically in Muslim American communities: a smiling Pakistani-American television executive, Aasiya Hassan, pictured in her studio standing next to Muzzammil “Steve” Hassan, her Pakistani husband and co executive. On February 12, Muzzamil turned himself in to the police in their suburb of Buffalo, New York, and allegedly confessed to murdering his wife. Her body was found decapitated in their television studio. Aasiya had obtained an order of protection against her husband that went into effect on February 6, the same day he was served with divorce papers. The Hassans were the founders of Bridges TV, launched in 2004 to broadcast programming that portrayed Muslims positively to North American audiences.

In contrast to the Rihanna/Chris Brown case, the focus of this murder’s coverage was not on the epidemic of intimate partner violence, but rather on the Hassans’ culture and religion. The set of media representations of Aasiya’s murder that circulated in February 2009 reveal the subtle racism governing how some characterize acts of intimate partner violence when both parties are racial minorities and especially, as in the Hassans’ case, South Asian Muslims. The mainstream media and feminist activists often draw on an impoverished understanding of culture to explain violence in Muslim families, a misuse of culture-as-explanation that profoundly undermines efforts to combat the violence. Many Americans would agree that our culture is steeped in violence to the point of desensitization; we regularly consume sexualized representations of violence against women as entertainment, and intimate partner violence exists in our society at rates that ought to alarm us.

Still, it makes little sense to us to talk about Valentine’s Day as a cause of domestic violence in this country or to argue that Christian views of Eve’s role in the Fall cause abuse. In cases when white males perpetrate violence the focus is on the psychological portrait of this individual: family history, childhood, mental health. Yet when a Muslim woman is killed violently by a Muslim man, we are willing to accept culture as an explanation in a way that would never be satisfactory if the perpetrator were white, just as we tend to look for cultural explanations for teen pregnancy among blacks and Latinos but treat pregnant white teens as individual cases. In the case of Muslims, this racial double standard is a feature of what political scientist Mahmood Mamdani terms “culture talk,” the pervasive assumption that while our modern culture is complex, creative, and changing, Muslim cultures are simply ancient rules petrified into lifeless, static customs. The assumption is that in our culture, violence is an exception so we must investigate the perpetrator’s psyche or individual life experience, while in their culture violence is the norm, so what is relevant is their entire culture or religion. In fact, the diverse range of cultures inflected by Islam worldwide and represented by Muslim communities in the United States are just as complex, heterogeneous, and modern as the dominant culture in this country. The fight against domestic abuse in all cultural contexts will fail if cultural norms and vulnerable populations are not taken into account. Although intimate partner homicides are not caused by Islam or any particular Muslim culture, this does not mean that culture is irrelevant.

This critique has two purposes. First, it is intended as an instructive guide for those public servants who intervene in cases of domestic violence involving minority families in general, and Muslim American families specifically. When social workers, police officers, lawyers, advocates for women and children, and other types of public servants make statements to the media about domestic violence cases involving Muslims, how they choose to talk about Islam or, more to the point, how they choose not to talk about Islam, profoundly affects the racial climate Muslim Americans navigate. But more significantly, it lowers the likelihood that other Muslim victims of domestic violence will seek out help. Battered women of color often fail to seek help because they do not want to be reduced to a stereotype. They are not simply protecting their community or their abuser from racism; their silence about abuse becomes a way to reject the humiliating role of oppressed brown woman who needs whites to save her from her culture. For example, studies on Arab- American women show they have strikingly low rates of reporting abuse. Aside from language barriers, a lack of information about available support services, and similar issues, the perception that the greater society is hostile to Arabs and/or Islam is a major barrier that prevents victims from trusting institutions and seeking a way out of their abusive situations.

Immediately after the Hassan tragedy, Muslim American leaders, activists, and organizations nationwide publicly condemned the murder, offered condolences to the victim’s family, and turned their attention to local grassroots work. For example, a national campaign was organized to encourage imams to devote their Friday sermons to the topic of domestic violence and the accompanying shame and denial that often allow abuse to persist. Although Aasiya’s murder is no longer a news story, Muslim institutions across the country have since developed far more aggressive policies to combat intimate partner violence. The second purpose of this report is to alert Muslim American community leaders and activists to how punitive anti-abuse policies might undermine their efforts to combat domestic violence, particularly since studies suggest that Muslim Americans reach out to imams more than any other mental health service.