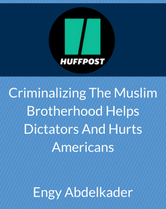 In his upcoming visit to Washington, Egypt’s President Abdul Fatah el-Sisi, who rose to power after a military coup in 2013, is expected to seek the Trump administration’s commitment to criminalize his political opposition by designating the Muslim Brotherhood a Foreign Terrorist Organization.

The Muslim Brotherhood, a political movement that originated in Egypt in 1928, that has since publicly condemned ideologically motivated violence, is the primary political challenge to Egypt’s ruling military elite.

And here is where Arab authoritarianism and American Islamophobia converge.

Senator Ted Cruz (R-TX) – who has emphasized the need to “call the enemy by its name” – introduced The Muslim Brotherhood Terrorist Designation Act in early January 2017; while it is the most recent in a series of legislative attempts to render the Muslim Brotherhood terrorists, others are lobbying the White House to sign a related Executive Order criminalizing the group.

On its face, this effort is part of the conservative battle against “radical Islamic terrorism,” highlighted during the president’s inauguration address and his speech to Congress. In recent months, the president’s advisors have repeatedly referenced the Muslim Brotherhood in this context. U.S. Secretary of State Rex Tillerson, for example, has equated the group with al-Qaeda. Senior White House strategist Steve Bannon described the Muslim Brotherhood as “the foundation of modern terrorism.” In his prior capacity as a member of Congress, now CIA Director Mike Pompeo supported a bill that would have designated the group a terrorist organization. And, Sebastian Gorka, who serves as Deputy Assistant to the president, linked al-Qaeda to the Brotherhood’s ideology promoting religious governance.

Still, for all of the rhetoric about eradicating “radical Islamic terrorism,” the Muslim Brotherhood has never been linked to  terrorist attacks on U.S. soil.

International terrorists designations abroad, such as in Egypt and Saudi Arabia, have been largely politically motivated attempts to silence a formidable opponent advocating for social, religious and political reform.

As I’ve written elsewhere, criminalizing the Muslim Brotherhood is widely viewed as a means to shutter U.S. Muslim civil society. (For more, see this related resource from the Institute for Social Policy and Understanding) Anti-Muslim extremists, who now enjoy ties to key operatives within the Administration as well as members of Congress, have long claimed (falsely) that American Muslim organizations, such as the Council on American Islamic Relations (CAIR) and the Islamic Society of North America (ISNA), are nothing more than a front for the Muslim Brotherhood. By rendering the Muslim Brotherhood a terrorist organization, such organizations would potentially be labeled as ‘guilty by association,’ which would impact each adversely.

It is important to recognize, however, that it’s not just these groups – which you’ve probably never heard of – that will be hurt.  It’s the individuals they were created to serve as well.  CAIR, for example, is the nation’s largest American Muslim civil rights group.  When an American Muslim student is bullied, their parents call CAIR.  When an American Muslim woman is physically assaulted because of her religious attire, she calls CAIR.  When a mosque is vandalized, its leaders call CAIR.  Criminal prosecutions against CAIR, as a so-called front for the Muslim Brotherhood, don’t  just undermine the institution, but the ability of American Muslims to realize their legal rights as well.

In essence, our laws require that the war against terrorism can’t be used opportunistically to justify the repression of religious minorities and their institutions.

This article originally ran in the Huffington Post on March 29, 2017.