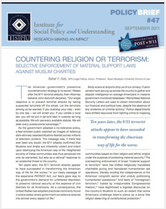 The American government’s preventive counterterrorism strategy is no secret.  Weeks after the 9/11 terrorist attacks, then-Attorney General John Ashcroft declared, “Our single objective is to prevent terrorist attacks by taking suspected terrorists off the street. Let the terrorists among us be warned: If you overstay your visa – even by one day – we will arrest you. If you violate a local law, you will be put in jail and kept in custody as long as possible. We will use every available statute. We will seek every prosecutorial advantage.”

As the government adopted a no-tolerance policy, a fear-stricken public watched as images of nefarious dark-skinned, bearded Muslims flashed across millions of television screens. The message was, if there had ever been any doubt, the 9/11 attacks confirmed that Muslims and Arabs are inherently violent and intent upon destroying the American way of life. Heightened scrutiny of these communities was thus perceived not only as warranted, but also as a rational response to an existential threat to the country.

Ten years later, the 9/11 terrorist attacks appear to have succeeded in transforming the American way of life for the worse. In our hasty passage of the expansive PATRIOT Act, our fears gave way to the government’s demand for unfettered discretion to preserve national security at the expense of civil liberties for all Americans. As a consequence, the United States has adopted practices commonly found in police states where government surveillance extends into almost every aspect of life.

Body scans at airports strip us of our privacy. Fusion centers have sprung up across the country to gather and deposit intelligence on average Americans in massive government-monitored databases. Warrantless National Security Letters are used to obtain information about our financial and political lives, despite the absence of any evidence of criminal activity. Police departments have shifted resources from fighting crime to mapping communities based on their religion and ethnic origins under the auspices of protecting national security. The overreaching enforcement of broad “material support to terrorism” laws has chilled religiously mandated charitable giving and hampered humanitarian aid operations, thereby eroding the independence of the American nonprofit sector and unduly politicizing humanitarian assistance. And fears of “homegrown terrorism,” fueled by irresponsible Congressional rhetoric, have legitimized a bigoted discourse on the country’s Muslims to such an extent that some Americans challenge Islam’s status as a bona fide religion deserving of constitutional protection.

At first glance, the preventive paradigm appears facially legitimate. Few would contest the collective public safety interest in stopping terrorism before it occurs. even so, at what point should the government be permitted to investigate individuals? Does mere political dissent, even if virulently anti-American, or unpopular orthodox religious practices suffice to subject individuals to heightened scrutiny or a loss of liberty? At what point does legitimate counterterrorism become political and religious persecution? The answers determine the type of country we want to live in: a free and just society consistent with the Founding Fathers’ vision, or a paranoid society dislodged from its fundamental principles of fairness and the rule of law.

While post-9/11 preventive counterterrorism policies have adversely impacted various groups of Americans, no group has been as deeply affected as the Muslim community, especially its Arab and South Asian members. Mosque infiltration has become so rampant that congregants assume they are under surveillance as they fulfill their spiritual and religious obligations. Government informants have ensnared numerous seemingly hapless and unsophisticated young men, thereby sowing distrust among Muslims. Aggressive prosecutions of Muslim charities and individuals across the country have embittered communities that feel besieged by their government and distrusted by their non-Muslim compatriots. As most clearly evinced in the vitriolic discourse surrounding the Park 51 Community Center in lower Manhattan during 2010, selective counterterrorism enforcement has also fueled public bias against Muslims. As a consequence, the vibrancy and development of civil society within these communities is at risk of being significantly stunted.

This article focuses on the use of material support laws in the counterterrorism preventive paradigm and the significant risk they pose to the civil rights and civil liberties of those communities most targeted: Muslim Arabs and South Asians. The wide-reaching and devastating effects of these broadly interpreted material support laws on American Muslim charities and their donors, as well as on the broader American nonprofit sector, has effectively criminalized otherwise legitimate charitable giving, peace-building efforts, and human rights advocacy.

To the extent that these groups are the “miner’s canary” in forecasting the post-9/11 loss of civil rights and liberties for all Americans, their experiences demonstrate the United States’ downward progression away from the Founding Fathers’ vision of a society where individuals can speak, assemble, and practice their faith free of government intervention or persecution.