Confronting the New Southern Strategy of Anti-Black Racism and Islamophobia 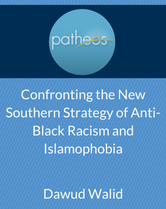 Confronting the New Southern Strategy of Anti-Black Racism and Islamophobia

American Election cycles normally have a polarizing effect on our society. In attempts for politicians to garner monetary support and ultimately votes, rhetoric has always been projected to show the differences between candidates’ positions and segments on their identities. At the heart of separating some from others, race and religion have and continued to be deployed explicitly and implicitly in order to rally bases or to otherize the competition.

Within this context, there is a common thread between systemic anti-Black racism and contemporary Islamophobia in our socio-political landscape.

Anti-Black racism is America’s original sin.  It was institutionalized during chattel slavery and the disempowerment of African Americans during the post-Reconstruction and Jim Crow eras. Current manifestations can be seen in today’s mass incarcerations and extra-judicial homicides by police, as well as in ongoing educational, employment and housing disparities in African American communities.

In the language of French critical theorists Frantz Fanon, Black folks have always been the political wretched of the United States. The hyperbole which was once openly used to openly vilify the African Americans, the historically wretched, has morphed more so into code language.

The infamous Southern Strategy, unintendedly exposed through a 1981 discussion with GOP operative Lee Atwater, highlights the deliberately subtle racism expressed in our socio-political environment. Racial slurs against Blacks were replaced with attacks on welfare even though Whites have always been the majority of Americans on public assistance. Calls for segregation were replaced with calling for states’ rights and an end to affirmative action. Making the problem of crime almost synonymous with Blackness in campaigns became normative among Republicans as well as some well-known Democrats.

Today, an addendum to the Southern Strategy in post-9/11 America is the anti-Muslim component.

Muslims, who come from varying racial backgrounds including African Americans, have become a political whipping board in recent elections in America on local, state and federal levels. Muslims are the only religious group in America who find the questioning of their American identity as seemingly politically acceptable.  This continues to be done explicitly as well as implicitly by those who use the Southern Strategy against African Americans. Hence some politicians still support temporarily banning Muslims from immigrating to America as well as banning the relocation of Syrian refugees into our country or particular states.

The otherizing of Muslims in their political strategy has even targeted Christians such as President Barack Obama who was frequently called a secret Muslim, in particular during the peak of the Birther movement, as well as accusations against former Secretary of State Hillary Clinton being framed as a dupe for the Muslim Brotherhood due to her having American Muslim Huma Abedin as her closest aide.

The convergence of the Southern Strategy, which uses anti-Black racism, and Islamophobia is clear in the current political environment. An example of this in policy terms is highlighted by a recent report by the Institute for Social Policy and Understanding (ISPU) entitled “Manufacturing Bigotry: A State-By-State Legislative Effort to Pushback Against 2050 Targeting Muslims and Other Minorities.”  The report concluded that the same politicians who introduced and voted in favor of so-called Voter Identification laws on states level, which are designed to disproportionately exclude African Americans from voting, are the same elected officials who introduced and voted in favor of so-called Anti-Sharia/Anti-Foreign legislation which treat American Muslims as a fifth column.

Moreover, the same candidates who are campaigning under the flag of restoring “law and order” — a code phrase to mean ramping up policing and incarcerating Black people — are the same people who talk about keeping America safe from terrorism and so-called “no-go zones” meaning Muslims. The need to “take our country back” or “make America great again” is the phraseology of racism to invoke fears about African Americans and Muslims in particular but also Latinos and any other group outside of American White patriarchy.

In order to undo racism in America, we must be clear on the underpinnings of divisive language which translate into public policy that seek to maintain privilege for some while marginalizing others. People of good conscience are obliged to have courageous conversations about racism in America with the recognition that although everyone’s pain is not the same, many of us have trauma to work through while all of us have fears to overcome.

Recognizing that anti-Black racism and Islamophobia are real and connected problems in America and confronting the Southern Strategy are part of the process of making our country into a more perfect Union.

Dawud Walid is  the executive eirector of the Michigan chapter of the Council on American-Islamic Relations (CAIR-MI), which is a chapter of America’s largest advocacy and civil liberties organization for American Muslims He is a member of the Michigan Muslim Community Council (MMCC) Imams Committee and is also a political blogger for the Detroit News from January 2014 until the present. He has been interviewed and quoted in approximately 100 media outlets ranging from the New York Times, Wall St Journal, Jet Magazine, National Public Radio, CNN, BET, FOX News and Al-Jazeera.

This article originally appeared in Patheos