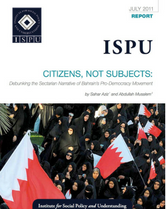 While President Obama’s Middle East speech on May 19, 2011 was a welcome change of course, it was delivered long after the United States should have started backing its rhetoric with action and trying to stop the gross human rights violations occurring in Bahrain. His administration must take advantage of the shrinking window of opportunity to implement the ideals envisioned in his historic 2009 Cairo speech, for the United States’ standing is now at risk in a pivotal region in the world – one that is at the center of its entire national security strategy.

Washington has continued to defer to Manama based on the pretext that the ongoing conflict is more about sectarianism than democracy. But to dismiss the demonstrations as merely the latest iteration of a centuries-old sectarian conflict ignores the complex social, political, and economic factors that far surpass mere sectarian rivalries. Bahrain suffers from the same ills plaguing other Arab countries: a shortage of professional jobs for the growing number of its college graduates, increasing prices in the face of stagnating wages, and little political space for citizens to call upon their government to address existing social and economic challenges. As with other Arab regimes, the government diverts its citizens’ attention to external forces and actors to avoid assuming any responsibility for solving its domestic problems. Specifically, allegations of an Iranian conquest via the Bahraini Shi’a are simply another iteration of the royal family’s traditional manufacturing of sectarian conflict for its own benefit. Although Iran’s goals of regional dominance are no secret, the threat of an Iranian-style Shi’a takeover is a government assertion put forward and then exaggerated to persuade its Gulf neighbors, western allies, and the Sunni political elite that there is no acceptable alternative to the monarchy’s absolute control and consequent suppression of its citizens.

Strikingly absent from the discourse about the country’s ongoing pro-democracy movement are the non-sectarian grounds upon which the calls for democracy are based. A closer look at the recent demonstrations indicates that the movement’s impetus is the Bahrainis’ desire for universal social, economic, and political rights irrespective of religious sect. A growing sense of political disenfranchisement is spreading among both Sunni and Shi’a citizens who have been excluded from political and business opportunities. Bahrain’s culture of nepotism and cronyism benefits a select few. As the quality of life for the majority declines among all sectarian affiliations, the government leverages the beneficiaries of its patronage system to counter all calls for an equitable distribution of wealth, political freedom, and equal employment opportunity based on merit. As tempting as it may be to reduce all of these factors to mere sectarian rivalry, accepting that particular narrative has grave consequences on American strategic interests in Bahrain and the wider Middle East.

This report counters the false assumption that Bahrain’s pro-democracy movement is merely another round in the longstanding sectarian strife that destabilizes the country and the Gulf writ large. Rather, the ongoing demonstrations are a cooperative effort between the country’s Sunni and Shi’a citizens to call for meaningful democratic processes and institutions. Whatever animosity exists within the Bahraini population is directed at a government and members of a ruling family that have broken their promises for more economic opportunity and political freedom, and less corruption and authoritarianism. Upon witnessing the remarkable display of people power in Egypt and Tunisia, Bahrainis are no longer satisfied with being treated as subjects; rather, they are demanding to be treated as citizens with twenty-first-century political, social, and economic rights and the power to shape their nation’s destiny.

This pro-democracy movement faces significant obstacles, given the backdrop of regional power struggles for control of this strategically located island coupled with a ruling family desperate to retain its relevancy. Trapped within the broader Saudi-Iranian geostrategic struggle for power, it can expect unrelenting opposition from oil-rich Saudi Arabia. Indeed, Saudi Arabia’s desire to maintain the status quo, supplanted with financial incentives, has apparently become a greater challenge to Bahrainis’ reform efforts than any opposition from the Bahraini ruling family.

Meanwhile, despite calls for universal human rights, the Obama administration has been disappointingly reticent. In stark contrast to its response to the Egyptian, Tunisian, and Libyan protests, Washington’s (until recently) timid response has been interpreted as a green light by the royal family to brutally crackdown on anyone involved, be they middle-class professionals, blue-collar workers, or unsupportive of the official narrative of sectarian conflict. Nurses and doctors are tried in military courts, school-aged girls are beaten to extract false confessions against their families, Shi’a mosques are destroyed for supporting the demonstrations, and political prisoners are beaten to death.

The Arab people have spoken loud and clear – they will no longer tolerate either the authoritarian regimes or the double standards of their western allies. Based on the foregoing analysis, this report recommends steps that would both promote democracy in Bahrain and preserve American interests in the Gulf and the wider Middle East.