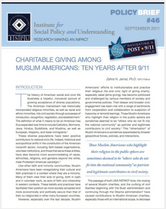 Since September 11, 2001, Muslim nonprofits, charities, and individuals have come under increasing scrutiny as the American government has bolstered its national security measures through laws, regulations, and guidelines on transparent and accountable giving. The result has been major shifts in the community’s giving practices. These can be classified as two broad reactions8: (1) a particular group of Muslim leaders and community members, nonprofit leaders and scholars, and some government officials who indicate that these policies have led to the victimization and disenfranchisement of Muslim Americans and (2) another group of Muslim Americans who indicate that the post-9/11 context has enabled and enhanced the community’s pre-9/11 outreach to other faith and civic communities through voluntary service and dialogue. for the second group, giving is not simply con ned to donating money; rather, it also consists of giving one’s non-monetary resources: time, knowledge, and skills. The differences between these two broad reactions lies in different interpretations of Islam, including what constitutes giving, to whom one can give, and how one can give. In addition, the mainstream American nonprofit sector has responded with concern and shifts in its own procedures in light of Washington’s post-9/11 guidelines on charitable giving.

On the eve of the tenth anniversary of 9/11 and during Ramadan, in which many Muslims increase their almsgiving, the Institute for Social Policy and Understanding (ISPU) has commissioned a report on Muslim American giving practices to gauge the context, key issues, implications, and recommendations of how to move forward in ways that uphold national security, protect civil liberties, and provide an inclusive understanding of what it means to be an American. This report discusses the background and context of the community and its giving practices, the ramifications of a post-9/11 world on the monetary giving practices of the community and of the American nonprofit sector, and recommendations for various stakeholders (including governmental bodies, the nonprofit sector, academics, journalists, and community leaders). It is based on ethnographic inquiries, participant observation, and some 200 interviews with nonprofit and foundation leaders, government officials, policy analysts, scholars, and Muslim leaders in Houston, new York, Chicago, Los Angeles, and Washington, DC. This research was conducted from 2005-08, with follow-up research conducted in 2010-11 in the midst of a deepening Islamophobic environment and a shifting geopolitical landscape.