Challenges Facing the New President in the Broader Middle East: A Symposium 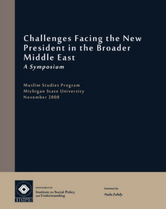 Challenges Facing the New President in the Broader Middle East: A Symposium

On November 12, 2008, students, scholars, and interested citizens convened in East Lansing to hear perspectives from an array of experts on the greater Middle East. This symposium, “Challenges Facing the Next President in the Middle East,” was hosted by Michigan State University’s (MSU) Muslim Studies Program with generous co- sponsorship by the Institute for Social Policy and Understanding (ISPU) and the Association of Muslim Social Scientists of North America (AMSS). These challenges were discussed in relation to a variety of countries and issues, including the Taliban’s rejuvenation and its impact on Pakistan and Afghanistan, Iranian aspirations for pre-eminence in the Gulf, the Israeli-Palestinian conflict, and political Islam. Speakers also highlighted the timeliness of such topics, given American leadership around the world and the contemporary global political climate. While participants had varying feelings on whether Obama would usher in considerable changes in foreign policy, a general consensus was reached that the nuance surrounding Middle Eastern issues demands more critical analyses if the usual oversimplifications are to be countered. By heeding the complexity of these challenges and analyzing them in their proper contexts, the potential for a positive transformation of American policy in the region can be achieved.