Born in the USA: How Nativity Affects the American Muslim Experience 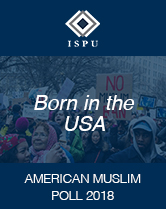 Born in the USA: How Nativity Affects the American Muslim Experience

A significant proportion of American Muslims are immigrants, with the Institute for Social Policy and Understanding’s (ISPU) 2018 American Muslim Poll finding that 49% were born outside the United States. Given the often (and, at times, vastly) differing life experiences between native-born and foreign-born American Muslims, it is not surprising that a recent Pew Research Center analysis found these two groups significantly diverged in terms of socioeconomic status and perceptions of societal discrimination. Utilizing our 2018 poll data, we’re extending this analysis and examining whether this experiential divide influences political attitudes and behaviors.

In line with the Pew analysis, we find that American Muslims born in the United States are significantly more likely to believe that Muslims in the US face discrimination. Figure 1, however, also demonstrates that US-born Muslims are also significantly more likely to report having personally experienced various modes of discrimination—whether on the basis of religion, race, or gender. Although the researchers at Pew hypothesized that these, and other related differences in discriminatory experience, may be a function of race/ethnicity (specifically, with African Americans who are Muslim presumably reporting discrimination to a much higher degree than others), we do not find that to be an obvious driver of this pattern.

Figure 2, for example, plots the proportion of American Muslims who reported experiencing racial discrimination, subdivided by race/ethnicity and nativity. If there was indeed a racial divide in any of the measures in ISPU’s survey, it would be most evident in this question, yet we observe virtually identical proportions for American-born Muslims of all backgrounds (except for those self-identifying as white). A more noticeable, if not always statistically distinguishable divide, exists within each racial/ethnic category on the basis of nativity, a pattern that is replicated among the remaining questions on discrimination. A more plausible explanation, therefore, could be that American-born Muslims are more attuned to the varied forms of discrimination that they may encounter on a day-to-day basis in America and thus can more easily code discriminatory behavior when they experience it.

A story recently shared by a community organizer in New York City illustrates this point. She recounted a conversation with an Iraqi refugee family who complained that their neighbors called them “terrorists,” threw garbage at their doorstep, and demanded they “go back to where they came from.” But when asked if they had experienced “racism,” they said no. Instead, they explained this treatment as their neighbor’s “jealousy” of their accomplishments and resilience in a new country.

Surprisingly, this gap in societal perception does not translate to varied political attitudes. As Figure 3 shows, nativity has little to no discernible effect on one’s support for President Trump, self-identification as a Republican or a Democrat, or placement on the political ideology spectrum.

We do, however, find a divide in terms of political behavior. Figure 4 demonstrates that, among eligible voters, foreign-born American Muslims are only slightly less likely than their US-born counterparts to report a desire to vote in the November 2018 midterm election (notably, this survey was fielded in January 2018), but are much less likely to be registered to vote. Thus, perhaps the most meaningful distinction on the basis of nativity is the rate of “Inshallah Voters” (that is, the difference between the intention to vote and voter registration): 8% for US-born Muslims versus 14% for foreign-born Muslims.

The robustness of this gap, however, is still an open question—that is, whether this finding will hold steady or whether it is merely an artifact of a less mobilized Muslim electorate remains to be seen. Indeed, given the enhanced effort to get out the American Muslim vote this election cycle, future polls may very well demonstrate significant (perhaps lasting) shifts in this community’s level of political engagement.