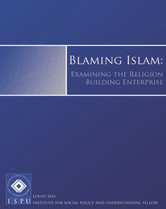 Islam is in need of a new interpretation and Muslim societies are in need of serious reform. Such reform is already underway, and, for more than a century, Muslims have been engaged in an internal struggle to redefine modern Islamic societies in ways that aim at empowering civil society and ensuring democratic control. A call for external intervention to restructure religion and society is faulty, and is guilty of misreading Islam and ignoring the sociopolitical reality that gives rise to global terrorism.

Religion building is perilous, complex, ill-conceived, and practically untenable. It is a distraction and a blatant attempt to avoid any serious evaluation of the responsibility of world powers for the radicalization of Muslim politics. The rise of radical Islam cannot be explained purely on the level of religious doctrine. Radicalization of Muslim politics is directly connected to the rise of authoritarian regimes in Muslim societies. Authoritarian Middle Eastern regimes that suppress open debate and silence opposition have long enjoyed the support of successive U.S. administrations.

On balance, Islam has been a positive force, rather than a villain to be arrested and chastised, in the development of the modern Middle East. The focus on radical groups perpetrating violence in the name of Islam prevents some analysts from appreciating the centrality of Islamic notions and values in the progress toward a more open society and vibrant culture. A full assessment that takes into account the impact of Islamic reform on Muslim society would illustrate that pessimism toward Islam, reflected in Civil Democratic Islam and similar documents, is unwarranted.

While urging support to one group and opposition to another, the report remains oblivious to the connection of the various ideological groups to the larger population in Muslim societies and to one another. The United States, as an external political actor that is increasingly perceived by Muslims as biased and uneven-handed, cannot positively affect political development by rendering support on the basis of artificial religious preferences. Rather, it must base its positions on intrinsic values and political principles. In actuality, Benard’s recommendations are nothing but a recycling of the very old foreign policies that got us where we are today and that have led to the radicalization of the Middle East.

The United States has tried in the past to put its weight behind Muslim secularists. The result has been the aggravation of the internal political balance and the radicalization of the societies where the U.S. took sides on the basis of superficial criteria and short-term interests. It was the very approach of siding with modernists against socialists and traditionalists that got us into trouble with the Iranians, the Lebanese, and, most recently, the Palestinians.

The report is conspicuously silent on the effects of U.S. foreign policy, which has been frequently characterized by Muslims as one of inconsistency and double standards — one that supports friendly dictators and corrupt, but useful, regimes in the Muslim world, while pushing for democratization in Eastern Europe; one that defends human rights in China, but ignores them in the Middle East; and one that protests Palestinian violence against Israel, but remains silent in the face of Israeli violence in Palestine. Indeed, the politicization of Islam and the rise of anti-Americanism are directly linked to the very efforts that aim at marginalizing Islam and forcing Western secularism on Muslim society.

The author of Civil Democratic Islam has surprisingly chosen religious identity rather than political values to distinguish foes from friends. While Civil Democratic Islam declares democracy and civil rights to be its ostensible goals, it surprisingly stresses religious doctrine and lifestyle to distinguish democratically oriented Muslims. Benard can hardly say the same thing about similar practices among Christians and Jews. The author would not use the same terms to describe Joe Lieberman, the U.S. senator from Connecticut, who is also a practicing orthodox Jew.

Containing radical groups and ensuring more friendly and cooperative relations with the Muslim world requires a drastic shift in policy and attitude. Rather than searching for “lifestyle” criteria to separate friends from foes, the United States’ position should be based on principles and values. The United States should support and cooperate with political forces in the Middle East that uphold the values of freedom, equality, and tolerance of ethnic and religious diversity, and should embrace those who display commitment to democracy and the rule of the law, regardless of their religion, religious doctrines, and their “lifestyle.”

Rather than using lifestyle and religious criteria to assign guilt, the U.S. government needs to extend its founding principles to followers of all religions, and ensure that it does not use different standards for dealing with different religions. The United States must be consistent in pursuing its support for democracy and human rights, and must ensure that the principles of right and justice that guide its relations with Europe also apply to its relations with Muslim societies.

American Muslims can be of great help in fighting terrorism and extremism, and in bridging the deepening divide between the United States and the Muslim world. American Muslims have deep understanding of both Muslim and American cultures, and are well-positioned to help reconcile Islam and the West. American Muslims have already made remarkable achievements at reconciling Islamic values with the founding principles of the United States, and have managed to develop good and important experiences as to how Islamic values can bear on modern living. They can be instrumental in sharing their experiences of aligning Islamic values and education with democratic institutions and practices with coreligionists in Muslim countries. But for that to happen in more effective ways, American Muslims need to be involved in policy making and implementation, rather than allowing themselves to be marginalized and chastised.