Anwar Ibrahim & the Consolidation of Democracy in Malaysia 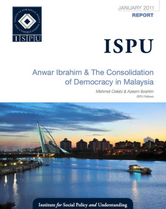 Anwar Ibrahim & the Consolidation of Democracy in Malaysia

Internationally, the United States has traditionally been regarded as a strong supporter of democracy and its practice in the developing world. Since its entry into the Second World War on the side of the western European democracies, through its identification with democracy throughout the ensuing ideological struggle known as the cold war, and to George W. Bush’s rhetorical championing of democratization and freedom, the United States has been recognized as a country that stands up for democracies and democratization.

Lately, however, its visible commitment to democracy promotion has waned. Malaysia – a Muslim-majority country that has the potential to join Turkey and Indonesia in the nascent league of Muslim democracies – has been undergoing a particularly nasty struggle recently, one that has pitted democratic forces against autocratic ones, and clean politics against corruption. But despite this, pronouncements from the State Department have been very weak.

Supporting the advance of democracy is not just about calling for reforms. It is also about keeping a watchful eye on ensuring that democratic advances are consolidated and that countries do not slip back into corruption and authoritarianism. If the United States is to retain its reputation of standing firmly on the side of democracy in the region, it must speak out now. At the very least, it must lend its support to the growing clamor for dropping the charges made against former Deputy Prime Minister Anwar Ibrahim.

The following memo offers a brief primer on the Anwar Ibrahim situation and why it is so important that the United States speak out on it.