An Extended Profile of the Pakistani Taliban 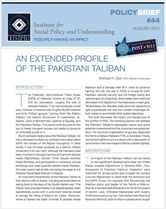 An Extended Profile of the Pakistani Taliban

The Federally Administered Tribal Areas (FATA) of Pakistan covers an area of 27, 270 sq. kilometers, roughly the size of Massachusetts. This tremendously small area, however, is home to over roughly 45,000 militants and forty militant groups,2 among them the Afghan Taliban, the Islamic Movement of Uzbekistan, al- Qaeda, Jaish-e-Mohammed, Laskhar-e-Tayyiba, and the Pakistani Taliban. This policy brief focuses on the last of these insurgent groups and seeks to produce an extended profile of it. Much confusion exists about the Pakistani Taliban, for many discussions about its members have taken place within the context of the Afghan insurgency. In other words, it has not been analyzed as a distinct militant movement in its own right, although its members have been involved in insurgent activity and terrorist attacks inside Afghanistan, trained Times Square bomber Faisal Shehzad, and participated in numerous suicide bombings and urban guerrilla attacks inside Pakistan, the most recent high profile one being the siege at the Pakistan Naval Base Mehran in Karachi.

An important characteristic of the Pakistani Taliban is their alliance with al-Qaeda, including personal relations dating back to the days of the Soviet-Afghan war.3 The Taliban have provided shelter to al-Qaeda leaders, been operationally active with it, and most recently vowed to avenge the killing of Osama bin Laden. Moreover, since al-Qaeda has been involved in attacks inside Pakistan and a decade after 9/11 vows to continue fighting the US, the war in FATA is crucial for both Pakistani national security and US foreign policy and national security objectives. Both states have made the elimination of al-Qaeda from the tribal areas a major goal. Nevertheless, the Pakistani state lacks the capability to fight a protracted war and this creates challenges for both states to accomplish their stated objectives.

This brief discusses the history and background of the conflict in FATA. The following section will address the Pakistani Taliban’s ideological nature and some essential characteristics of the movement are explained. Next, the structural organization of groups, especially the Tehrik-e-Taliban Pakistan (TTP), is illustrated. Finally, recruitment patterns are surveyed with a discussion of some factors that have helped militants mobilize fighters.