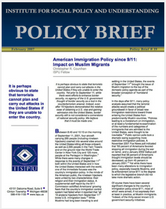 In the days after 9/11, many policy analysts assumed that the terrorist attacks would create a political groundswell in favor of broad new immigration restrictions toward those entering the United States from predominantly Muslim countries. “Policies leading to a moratorium on immigration, or at least a fundamental re-examination of the numbers and categories of immigrants that are admitted to the United States, were thought to be inevitable.”4 Public opinion polls took a dramatic swing supporting more restrictive immigration policies. A November 2001 Fox News poll indicated that “65 percent of Americans favored stopping all immigration during the war on terror, and a January 2002 Gallup poll reported that 58 percent of Americans thought immigration levels should be decreased, up from 45 percent in January 2001.”5 Yet while there have been many alterations to immigration policy, especially towards Muslims, and its enforcement since 9/11 is the degree to which the legislative branch did not take more dramatic action.