Alcohol Use by Muslim College Students in the United States: A Review 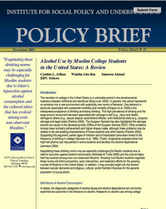 Alcohol Use by Muslim College Students in the United States: A Review

The transition to college in the United States is a vulnerable period in the developmental trajectory between childhood and adulthood (Boyd et al. 2005). In general, this period represents an entrance into a new environment with potentially new norms of behavior. One behavior in particular associated with substantial morbidity and mortality (Hingson et al. 2009) is the widespread acceptance of drinking and heavy drinking. This high prevalence of drinking and the large amount consumed has been associated with damage to self (e.g., injury and death), damage to others (e.g., sexual assault, secondhand effects), and institutional costs (e.g., property damage and legal costs) (Perkins 2002). The Surgeon General has also highlighted the damage alcohol can cause to the developing brain (Office of the Surgeon General 2007). Other problems include lower scholarly achievement and higher dropout rates, although these problems may be related to the pre-existing characteristics of those students who drink heavily (Perkins 2002). Supporting this argument, earlier ages of initiation and of intoxication have been linked to the frequency of drinking in college (Samson et al. 1989). Finally, longitudinal analyses show that high-risk alcohol use may persist in some students and develop into alcohol dependence (Jennison 2004).

Negotiating these drinking norms may be especially challenging for Muslim students due to Islam’s injunction against alcohol consumption (Michalak & Trocki 2006) and the cultural taboo that has evolved among even non-observant Muslims. Knowing how Muslim students negotiate these norms will inform prevention, early intervention, and treatment efforts for the growing number of Muslims in the United States. In addition, it may provide insight into the tension between secular demands and religious, cultural, and/or familial influences for the general population of young adults.