Al-Qa’eda in the Arabian Peninsula: Does It Pose a Threat to Yemen and the West? 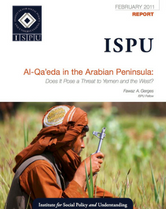 Al-Qa’eda in the Arabian Peninsula: Does It Pose a Threat to Yemen and the West?

In the past eighteen months, the Obama national security team has become increasingly more concerned about the threat that al-Qa’eda in the Arabian Peninsula (AQAP) poses to Yemen and the American homeland. According to leaked American diplomatic cables, during a March 2009 meeting between King Abdullah of Saudi Arabia and John Brennan, President Obama’s top counterterrorism adviser, the latter mentioned the United States’ fear of Yemen becoming another Waziristan and urged cooperation between the two countries to prevent al-Qa’eda’s dangerous influence in Yemen. The Saudi king replied that “having Somalia next door to Yemen only adds to the danger.”

In a December 2010 interview with ABC’s Good Morning America, Attorney General Eric Holder included the American-born Yemeni preacher Anwar al-Awlaki on his top list of concerns. According to him, al-Awlaki, believed to be hiding in Yemen and familiar with American ways, has been elevated to an exclusive group that includes bin Laden due to the advantage he has over other terrorists. “He would be on the same list with bin Laden,” the attorney general told ABC television. “He’s up there. I don’t know whether he’s [number] one, two, three, four — I don’t know. But he’s certainly on the list of the people who worry me the most.”

Indeed AQAP’s Yemen branch, under the leadership of Nasser al-Wahishi (a former private secretary to bin Laden and a disciplined and experienced operative) and Qassim al-Raymi (its military commander) has become more organized and coherent. Its recent resurgence is also closely linked to the country’s deteriorating social, economic, and political conditions as well as the dismantling of its neighboring Saudi counterpart. Its structure and conduct has changed since it merged with the Saudi branch in 2009 to form AQAP. The arrival of approximately two dozen seasoned and skilled fighters from Saudi Arabia, some of whom have fought in Iraq and Afghanistan, revitalized AQAP by providing a sense of purpose and initiative, as well as operational know-how in bomb making, media outreach, and other areas.

For example, Ibrahim Hassan al-Asiri, a Saudi AQAP operator who studied chemistry at King Saud University, is believed to be the top technical expert and bomb maker. American intelligence officials assert that he designed the foiled mail bombs in October 2010 as well as the underwear explosives. This son of a Saudi military officer is also suspected of designing the body-cavity bomb that killed his younger brother in a failed attempt to assassinate Prince Mohammed bin Nayef, the top Saudi counterterrorism official, last year. Al-Asiri, who never made it to Afghanistan or Iraq and who acquired his bomb-making skills after joining AQAP, shows how just one technical expert can serve as a force multiplier in a small group. He thrust AQAP into the spotlight as a major front in Washington’s war against al-Qa’eda and its allies and has rattled Obama’s national security team.

AQAP has also received notoriety due to Anwar al-Awlaki, a Yemeni-American cleric whom the Obama administration designated in April 2010 as a legitimate assassination target. While the media’s coverage of him focuses mainly on his ability to influence young, western Muslims, such as the Christmas Day bomber and the Fort Hood shooter, he is largely unknown in Yemen and neighboring countries. Although he serves as a unifying figure for AQAP, he has no social constituency inside or outside Yemen. In other words, Washington has overblown his importance.

Despite a concerted campaign by the Yemeni government and the American military to destroy AQAP, results have been mixed. As of June 2010, AQAP has carried out several attacks on security facilities in the south, killing about 100 members of the army and security forces and injuring many others. Its members have also displayed operational boldness and sophistication by launching simultaneous and coordinated raids on a mukhabarat (Yemeni intelligence) headquarters in Aden, freeing prisoners and killing eleven people, as well as an attack on two police stations in Zinjibar that killed three officers.

Such activities represent a radical departure for al-Qa’eda. After an American strike that killed Yemeni civilians and children in December 2009, its operators joined a protest rally broadcast live on Al Jazeera, during which a speaker shouldering an AK-47 rifle shouted to Yemeni counterterrorism officers: “Soldiers, you should know we do not want to fight you! There is no issue between you and us. The issue is between us and America and its agents. Beware taking the side of America.”

For a brief moment, AQAP seemed to have learned from al-Qa’eda’s past by avoiding the deadly trap of attacking the “near enemy.” Since its founding, Wahishi and Raymi have used Internet magazines and interviews with local journalists in a concerted effort to appeal to the people of Yemen, especially to the tribes that have offered them shelter and protection. They encouraged al-Qa’eda members to marry tribal women and mediate tribal disputes. In early 2007, Ayman al-Zawahiri issued an audiotape addressed to “the noble and defiant tribes of Yemen,” in which he urged them to imitate the defiant Afghan Pashtun and Baluch tribes and “support your mujahideen brothers.”Al-Qa’eda had learned a costly and painful lesson in Iraq: Muslim public support, especially by the dominant tribes, was vital to its survival. Local outreach, however, soon ended.

Marking a recent shift in its tactics, AQAP has declared all-out war against the “tyrant” Saleh government and its soldiers, “who terrorize Muslims, support the crusade against our country, and are the first line of American defense in Yemen.” In an August 2010 audio message, it also threatened to overthrow the Saudi monarchy “for its participation in the U.S.-led crusade against Islam” and called on the Saudi armed forces to attack Israel. Now the al-Qa’eda branch is waging a hit-and-run guerrilla insurgency campaign against the very Yemeni officers whom it had vowed not to fight. In an audio message, al-Qa’eda military commander Raymi declared his intent to establish the “Aden-Abyan Islamic Army” (AAIA), a militia that seeks to overthrow the Saleh regime–a tall order and one fraught with hubris, but nevertheless revealing of al-Qa’eda’s new tactics.

Regardless of al-Qa’eda’s rationalizing, the bloodletting will inevitably alienate ordinary Yemenis and will neither empower nor endear them to AQAP. Once al-Qa’eda’s presence becomes too costly for its tribal hosts it will become unwelcome, as happened in Shabwa province, where increasing evidence shows the situation between the tribes and al-Qa’eda to be “tense.” Al-Qa’eda operators were forced to leave some villages and flee to the mountains after locals became weary of their presence and the ensuing unwanted attention and risk.