Afghanistan 2012: The Beginning of the End Game 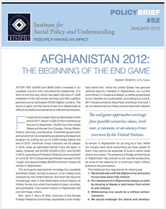 Afghanistan 2012: The Beginning of the End Game

Foreign forces began leaving Afghanistan at the end of 2011. About 14,000 of them withdrew by the end of December: 10,000 from the United States and the rest from Canada, France, Britain, Poland, Denmark, and Slovenia. The British government announced that it is considering accelerating its departure program by pulling out up to 4,000 troops before the end of 2013. American troop cutbacks will be deeper in 2012, when an estimated 26,000 more will leave. In reality, however, the 33,000 (10,000 in 2011 and 23,000 in 2012, according to President Obama’s announcement on June 22. 2011) troops being withdrawn are part of the “surge” and approximately 68,000 American troops will remain in Afghanistan.

The end game approaches envisage four possible scenarios: chaos, civil war, a vacuum, or an uneasy truce overseen by the United Nations. But what has become increasingly clear is that Washington should deploy its military forces only when the mission is clear, concrete, and achievable. The current mission in Afghanistan did not fulfill these criteria.

Sen. John F. Kerry (D-MA), chairman of the Senate Foreign Relations Committee, expressed a now widely held belief that “while the United States has genuine national security interests in Afghanistan, our current commitment, in troops and dollars, is neither proportional to our interests nor sustainable”, according to a June 8, 2011 Reuters article by Missy Ryan and Susan Cornwell. I do not believe that the military should have been allowed to remain in Afghanistan for as long as it has. While our troops have done everything we have asked of them, they cannot be expected to build a nation state where none exists. The presence of foreign armed forces in Afghanistan has proved to be counter-productive, as none of the reasons for a continued major military presence are persuasive.