Across the Atlantic: Islam, Europe, and the Repercussions of the Attacks 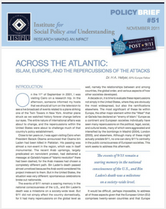 Across the Atlantic: Islam, Europe, and the Repercussions of the Attacks

On the 11th of September in 2001, I was visiting Cairo on a research trip. In the afternoon, someone informed my hosts that we should all turn on the television to see a live broadcast of events related to a plane striking one of the Twin Towers in New York. Another plane struck as we watched history forever change before our eyes. The entire nature of international affairs was about to change, and the repercussions within the United States were about to challenge much of that country’s policy establishment.

Close to ten years on, I was again visiting Cairo when President Barack Obama announced that Osama bin Laden had been killed in Pakistan. His passing was almost a non-event in the region, which was in itself monumental. The recent Arab uprisings, largely predicated on nonviolent protest, had delivered a message: al-Qa’eda’s hopes of “Islamic revolution” there had been dashed, for the Arab masses had chosen a completely different path. Bin Laden’s death passed almost unnoticed because the Arab world considered his project irrelevant to them. But in the United States, the situation was very different: spontaneous celebrations broke out nationwide.

The events of 9/11 remain a searing memory in the national consciousness of the U.S., and Bin Laden’s death was a milestone on a society-wide level. But 9/11 did not simply affect the country domestically, for it had many repercussions on the global level as well, namely the relationships between and among countries, the global order, and various aspects of how other societies developed.

A decade on, it is time to evaluate these repercussions not simply in the United States, where they are obviously the most widespread, but also the ramifications elsewhere. The most significant of these lie within Europe, the other major element within the “West” that al-Qa’eda has declared an “enemy of Islam.” Europe as a continent and European societies individually have seen many repercussions on the political, legal, social, and cultural levels, many of which were aggravated and intensified by the bombings in Madrid (2004), London (2005), and elsewhere. Although many of these might actually predate 9/11, no one can deny 9/11’s centrality in the public consciousness of European societies. This work seeks to address this aftermath.

It would be difficult, perhaps impossible, to address all of those aspects given that the European Union (EU) comprises twenty-seven countries and that Europe contains even more. Trying to cover them all would be an encyclopaedic effort, and thus beyond the scope of this work. Therefore, we will focus on introducing the Islam-Muslim-Europe relationship in the context of this fallout by providing an overview of Islam in European history that details how it and its followers figure within the continent. We then go on to consider five post-9/11 macro issues surrounding them: the multiculturalism debate, the reformation of Islam, the integralization of Muslims, the Sufi-Salafi sectarian divide, and security policy. These topics are not limited in terms of relevance to the European scene, but go far beyond it. Finally, we present two case studies of European societies, one within the European Union (the UK) and one without (Turkey).

We hope that this approach will enable policymakers, academics, and the general public to take a step back and see how European societies reacted to, and were affected by, this horrific event. It should be noted at the beginning that this work serves only as an introduction to these key issues, and that comprehensive work is still required in order to properly explicate upon them in detail. Nevertheless, raising these critical issues at this time fulfills a purpose in and of itself, among them the asking of serious (and perhaps controversial) questions as to whether the path taken was the only way to go and to evaluate the extent to which Europe’s response has benefited Europeans. While no society could have responded to 9/11 perfectly, no society can hope to improve without engaging in that difficult, self-critical process. The case studies presented herein serve as a potential step along that process of self-evaluation, one designed to ensure that European societies remain strong, secure, and committed to their values. This would be a shattering blow to all who seek to bring forth its ultimate demise.