A War without Bombs: Civil Society Initiatives against Radicalization in Pakistan 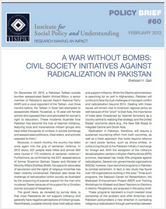 A War without Bombs: Civil Society Initiatives against Radicalization in Pakistan

Islamization, an outcome of Pakistani state policy, has been interlinked with radicalization and militancy among certain segments of society. Despite this, most Pakistanis do not support radical views and have negative attitudes toward militant groups. Nevertheless, a significant radicalized minority does exist, and the strong presence of militant and non-militant extremist groups makes radicalization a serious challenge.

In addition to the military-run deradicalization centers, several Pakistani and foreign NGOs have sought to counter extremism by creating a feeling of local ownership and helping to build local capacity, both of which are key for the projects’ continued effectiveness and sustainability. The programs detailed in this paper offer policymakers a successful model of deradicalization and the reintegration of child soldiers into society. They illustrate that an alternative program based upon dialogue and respect, rather than forced change, effectively engages madaris on the sensitive issues of curricular and pedagogical reform as well as support for democracy. In addition, they showcase examples of successful partnerships between Pakistan’s public and NGO sectors and between foreign
and local NGOs.

The declining presence of American and International Security Assistance Force (ISAF) soldiers in Afghanistan will dramatically change the nature of the insurgency in FATA, as well as increase the United States’ reliance on Pakistan to continue fighting terrorism and extremism. Given the Pakistani government’s limited success on this front and the myriad American-Pakistan complications, American policymakers should think about increasing partnerships with Pakistan’s civil society sector and giving it a stake in promoting and preserving peace in the country. Moreover, Islamabad should develop institutions and policies that integrate the military, civilian law enforcement, and civil society to fight radicalization and militancy.