A Portion of the People 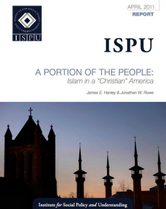 A Portion of the People: Islam in a “Christian” America

In 2010, almost nine full years after the 9/11 terrorist attacks, a surge of outrage over plans to build a Muslim community center in lower Manhattan swept the United States. In addition to physical recreation facilities, an auditorium, a library, and other amenities, the center would include a mosque. This seemingly innocuous project drew criticism because of its proximity to the site of the former World Trade Center and, despite being two blocks away, was soon given an inaccurate but politically powerful nickname: the “Ground Zero Mosque.” Critics were eager to interpret the project as an insult, an offense, and a sacrilege. But any possibility that this was an honest expression of concern solely about the center’s proximity to Ground Zero was foreclosed by a sudden increase in vocal opposition to proposed mosques as far from Ground Zero as Tennessee, Wisconsin, and even California.  Moreover, deliberate efforts were made to delegitimize American Muslims and deny them the protections of the Constitution. Bryan Fischer (director of issue Analysis for Government and Public Policy, the American family Association), argued that “[p]ermits should not be granted to build even one more mosque in the United States of America.” Going even further, Lieutenant Governor Ron Ramsey (R-TN) argued that Islam may not be a religion, but a cult, and therefore not protected by the first Amendment. And U.S. representative Peter King (R-NY) recently held a hearing of the house Committee on Homeland Security on the topic of “the extent of radicalization in the American Muslim Community and that Community’s response,” an approach that representative Keith Ellison (D-MN), the only Muslim member of Congress, accurately criticized as blaming all Muslims.

Such efforts to demonize specific subgroups and deny their legitimacy as citizens of the country in which they reside have often been a prelude to harsher political treatment that goes beyond the merely verbal. As one small effort to counteract this dangerous tendency, we argue here that the United States is not a “Christian” nation in the political sense and that its history and laws provide a space for people of all religions to live freely and practice their faith openly. Using two related lines of argument, we will show (1) that many of the country’s key founders were not “orthodox” Christians and rejected the idea that the country they were creating was politically based on a Christian identity and (2) that important foundational documents of the American republic, including but not limited to the Constitution, clearly eliminate the possibility that the U.S. was meant to be a Christian nation in a political sense. To briefly summarize, there is no defensible interpretation of America’s founding that supports the claim of a Christian polity or a demand for the exclusion of non-Christian faith traditions. People of all faiths are not merely distinct sets deserving of toleration, but are part and parcel of America—a portion of “We the People.”