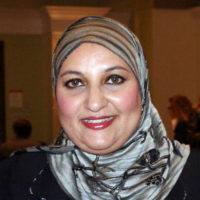 Dr. Sahar Khamis is an associate professor in the Department of Communication at the University of Maryland, College Park. She is an expert on Arab and Muslim media, and the former Head of the Mass Communication Department in Qatar University. Dr. Khamis holds a PhD in mass media and cultural studies from the University of Manchester in England. She is a former Mellon Islamic Studies Initiative Visiting Professor at the University of Chicago. She is the co-author of the books Islam Dot Com: Contemporary Islamic Discourses in Cyberspace (Palgrave Macmillan, 2009) and Egyptian Revolution 2.0: Political Blogging, Civic Engagement and Citizen Journalism (Palgrave Macmillan, 2013). She is the co-editor of the book Arab Women’s Activism and Socio-Political Transformation: Unfinished Gendered Revolutions (Palgrave Macmillan, 2018). She authored and co-authored numerous book chapters, journal articles, and conference papers, regionally and internationally, in both English and Arabic. She is the recipient of a number of prestigious academic and professional awards and a member of the editorial boards of several journals in the field of communication, in general, and the field of Arab and Muslim media, in particular. Dr. Khamis is a media commentator and analyst, a public speaker, a radio host, and a former human rights commissioner.

Jessica Weiss, “Sifting Through The Deluge Of COVID-19 Information: Sahar Khamis, Associate Professor of Communication, Stresses the Need for Media Literacy in Times of Crisis,” University of Maryland College of Arts and Humanities (ARHU), April 13, 2020.

“Faith in a Time of Fear: Spirituality and Coping with the Coronavirus Crisis,” U.S. Arab Radio, March 27, 2020.

“Paranoia, conflict and resilience: The Middle East at war with the Coronavirus,” The New Arab Voice, March 24, 2020.

“The rise of White Supremacist propaganda in the U.S.,” Scope with Waqar Rizfi, aired February 15, 2020 on Indus News TV.

“Why are people protesting against President Sisi in Egypt?,” aired September 30, 2019 on TRT World.

S. Khamis, “It is crucial to accept women’s right to be at the table,” The News International, September 22, 2019.

M. El-Nawawy and S. Khamis, “Blogging against violations of human rights in Egypt: An analysis of five political blogs,” International Journal of Communication 8 (2014): 962–82.

M. El-Nawawy and S. Khamis, “Cyberactivists paving the way for the Arab spring: Voices from Egypt, Tunisia and Libya,” CyberOrient 6, no. 2 (2012).