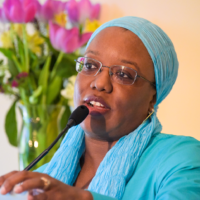 Precious Rasheeda Muhammad, a.k.a. “The History Detective,” is an independent scholar, author, lecturer, and researcher widely recognized for her original research contributions to the study of Islam in America. Her contributions can be found in academic journals, newspapers, magazines, encyclopedias, exhibits, award-winning books; on CNN.Com and NPR; at the Smithsonian; on podcasts, such as The Universal Title: Muhammad Ali’s Spiritual Journey, for which she served as an executive producer and principal writer; and more.

Precious also brings decades of commitment to interfaith work, including significant roles in planning and implementing the 2009 Parliament of the World’s Religions program held in Melbourne, Australia. For her community-building work, in the academic community and beyond, Coe College awarded Precious an honorary doctorate in 2010. For those contributions and helping change the way that Harvard University looks at Islam, as an area of study, Precious earned the special honor of becoming a Harvard Divinity School Bicentennial Peter J. Gomes STB ’68 Honoree in 2017. In 2019, then-Governor Ralph Northam of Virginia appointed her to serve on the inaugural Virginia African American Advisory Board and renewed her service a year later to a four-year term. She is a member of Alpha Kappa Alpha Sorority, Incorporated, especially drawn to the organization by its mission to be of “Service to All Mankind.” Her personal and professional motto is “Building community through history.”

She lives in Virginia with her husband and two daughters and will be commencing doctoral studies in religion at Yale University in fall 2022.