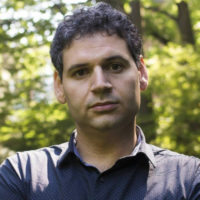 Dr. Karam Dana joined ISPU in December 2011 as a Fellow. He is an Associate Professor at the University of Washington Bothell, where he is the principal investigator of two projects: The American Muslims Research Institute (AMRI) and The Middle East Public Opinion Project (MEPOP). He received his PhD from the University of Washington in 2009, after which he held a one-year post-doctoral fellowship at the Center for Middle Eastern Studies at Harvard University, and was a Research Fellow at the Belfer Center for Science and International Affairs at the Harvard Kennedy School of Government. Dr. Dana was a faculty member at Tufts University, where he taught extensively on Middle East History and Politics. His Middle East-related research explores the intersection between economics and politics: the ways in which economic indicators have affected political (in)stability in the Arab Middle East, and the role of technology in shaping various social structures in the developing world (with a focus on the Arab world). Dr. Dana is the co-principal investigator of the Muslim American Public Opinion Survey (MAPOS), a research project that won the American Political Science Association’s Best Paper Award for 2008. He has secured multiple research grants over the years including a multi-year grant from the Social Science Research Council to engage U.S. policymakers, journalists, and scholars of Islam in a discussion to find a common ground to engage in a continuous conversation to better understand Islam and Muslims in the United States.

Karam Dana, Bryan Wilcox-Archuleta, and Matt Barreto, 2017, “The Political Incorporation of Muslims in America: The Mobilizing Role of Religiosity in Islam,” Journal of Race, Ethnicity, and Politics (Accepted/ Forthcoming).

Karam Dana, 2015, “Review of ‘Why the West Fears Islam: An Exploration of Muslims in Liberal Democracies’ by Jocelyne Cesari,” International Journal of Middle East Studies 47, no. 4: 837–39.

Karam Dana and Belal Salamah, 2015, “The Islamic Liberation Party: From Intellectual Awareness to Political Practice in Palestine and Beyond,” in Islamic Hizb ut-Tahrir in Palestine: Intellectual Foundation and Politics between Theory and Implementation, 119–50 (Beirut, Lebanon: Arab Institute for Research and Publishing).