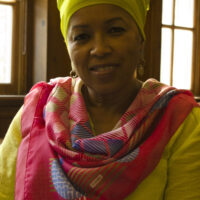 On March 20, 2022, the world lost a scholar, trailblazer, activist, and giant in her field: Dr. Debra Majeed.

Debra Majeed, Professor Emeritus of Religious Studies at Beloit College, was a religious historian who made the interconnection between religion, gender and justice central to her life’s work. With the publication of her groundbreaking work, Polygyny: What It Means When African American Muslim Women Share Their Husbands in 2015, Dr. Majeed worked with mosque communities for the cultivation of resources and support for healthy marriage regardless of form. Her other research interested included the care and support of Muslim widows, domestic abuse as an act of violence that happens in the lives of women, and the advocation of the normalization of Muslim marriage contracts.

Concern for family life issues led Dr. Majeed to develop Queen City Family Advocates, a grassroots initiative that interrogates and challenges attitudes, norms and policies that undercut the health and wellbeing of families in Charlotte.

Dr. Majeed was certified as a Guardian ad Litem, or legal advocate for abused and neglected children. She retired from Beloit in 2020; she was the first African American female and first Muslim to be tenured in the 175-year history of the college, and the first to be awarded Emeritus status. Her contributions to social justice on the campus and in the wider community during her 21 years of teaching led the City of Beloit to proclaim January 21, 2011, “Dr. Debra Majeed Day.” Dr. Majeed received her doctorate in Religious & Theological Studies from Northwestern University in 2001.

ISPU will continue to share and uplift Dr. Majeed’s important scholarship, as well as maintaining access to her work via this page.

“Afterword” from POLYGYNY: What It Means When African American Muslim Women Share Their Husbands, published in Half of Faith: American Muslim Marriage and Divorce in the Twenty-First Century