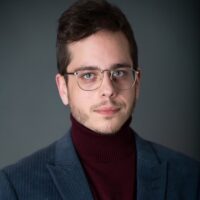 Brennan McDaniel is a PhD student in the Department of American Studies at Yale University. Drawing from Native American studies, Islamic studies, postcolonialism, and psychoanalysis, his research concentrates on the political economics of religion and secularism in the twenty-first century United States. Most recently, Brennan completed a chapter with Zareena Grewal entitled “American Islam, Settler Colonialism, and Democratic Empire in the Work of Robert D. Crane” which will appear in the forthcoming anthology Religion and U.S. Empire: Critical New Histories edited by Tisa Wenger and Sylvester A. Johnson. Brennan also receives instruction in both classical and folk harp repertoires. At ISPU, Brennan serves as Principal Investigator on the Native American/Indigenous Muslim Stories (NAIMS) project.