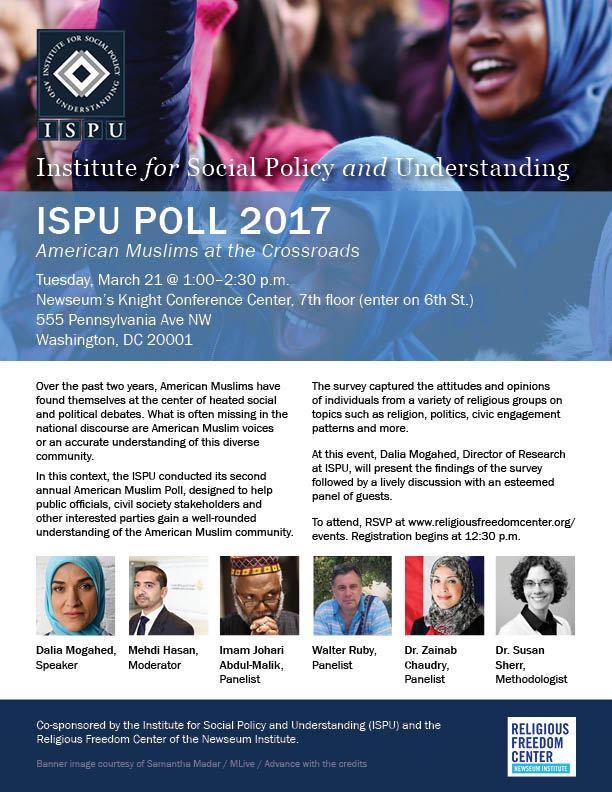 Over the past two years, American Muslims have found themselves at the center of heated social and political debates. What is often missing in the national discourse are American Muslim voices or an accurate understanding of this diverse community.

In this context, the ISPU conducted its second annual American Muslim Poll, designed to help public officials, civil society stakeholders and other interested parties gain a well-rounded understanding of the American Muslim community. The survey captured the attitudes and opinions of individuals from a variety of religious groups (i.e., American Muslims, Jews, Catholics and Protestants) on topics such as religion, politics, civic engagement patterns and more.

The poll results, to be shared by ISPU Director of Research Dalia Mogahed, will be followed by a lively discussion and an opportunity for Q & A with an esteemed panel of guests, moderated by award winning British journalist, author, and political commentator, Mehdi Hasan. Panelists will include Dr. Zainab Chaudry, a spokeswoman and the Maryland Outreach Manager for the Council on American-Islamic Relations; Imam Johari Abdul-Malik, the Director of Outreach for the Dar Al Hijrah Islamic Center in Northern Virginia; Walter Ruby, the Muslim-Jewish Relations Programs Director at the Foundation for Ethnic Understanding; and Susan Sherr, the Study Director from Social Science Research Solutions.

This event is cosponsored by the Institute for Social Policy and Understanding and the Religious Freedom Center of the Newseum Institute.

Registration on the day of the event starts at 12:30 p.m. Please RSVP here.

The event can also be viewed online and will be streamed live. Please see our Facebook page for more details on the day of the event.